Technology is seemingly being embraced in the world of sport. With the likes of Hawk-Eye, Snikometer as well as the technology in football like VAR and Goal Line Technology. But perhaps the biggest overall impact of technology is what’s happening off the field.

Stadium attendances are dwindling and spectators who would rather tune in from home are demanding a new type of experience. Social media, forums, chat services, podcasts, live streams, online highlights and in-play betting are providing both competition and alternative methods of engagement. During the FIFA World Cup in Russia, 77% of viewers were using a smartphone or tablet while watching the game. Below shows the number of people that attended games in Russia, compared to the capacity that stadiums hold. 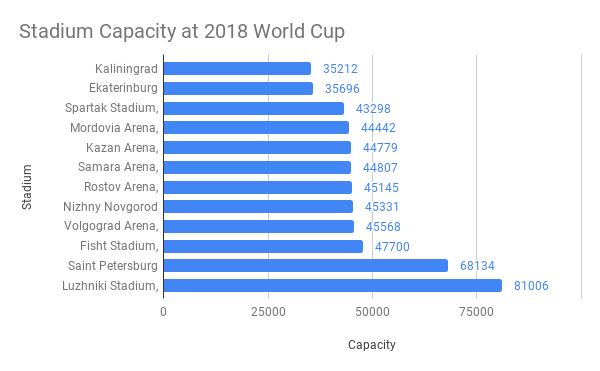 The importance of fan engagement is becoming more apparent within the sports industry. For example, The Open Championship partnered up with NTT Data UK. They set up an enormous screen in the spectator village that displayed streams of real-time match play data. The R&A also installed kilometres of cable and around 600 wireless access points around the course to keep fans connected throughout The Open championship. By implementing access points, also provided data on the fans who use its website, app and membership community.

Another technological angle to enhance fans experience would be Tottenham Hotspur new state of the art stadium. They have gone completely cashless to increase speed, more payment options and improved hygiene. A simple, quick and easy system that relies on complex technology to ensure the spectator has a positive experience.

Another impact technology has on sport and the sporting experience is that of social media. Fans find this a much more accessible way of trying to reach out and engage with their sporting icons. An example of this is the Juventus football Cristiano Ronaldo who’s following on Twitter is somewhere close to the 82.7 million. Whereas his club Juventus are merely around 7.7 million on their own Italian twitter page @Juventusfc.

Back in August 2019, the BBC released a documentary on beating the bookies. This gave a real insight into the way spectators tuned into sport. The days of just going to a game and watching the sport with a cup of Bovril or Pie are long gone. The below image is from Bet365 which shows a match between Udinese and Juventus. Using their App, allows the viewer to watch the game while making a bet simultaneously.

The Technology used in Football

It’s an interesting conversation really to see if the technology is enhancing or harming our enjoyment of support. The fact you have many different ways of tuning in and being able to follow sport makes keeping up to date and being involved in sport much easier. But is all this technology in football really better than sitting in the terraces watching your beloved football team play? Or travelling to a once a year event like Wimbledon or Silverstone? The global reach that technology has provided sport is only going to be a benefit surely? Recently Aston Villa signed Mbwana Samatta. The first Tanzanian to ever play in the Premier League. Below is an image of just how captivated the country was by their favourite son playing via Samatta’s Instagram.

Greenfield IT has a team dedicated to recruiting tech and digital skills for the sports industry. We support a number of major UK sports clubs and governing bodies, but also work with a number of sports tech firms whose products and services are focused on the sector.

Follow us for selected sports industry tech insights and career opportunities in this space. To find out more about how we can help your career in sports tech, or should you require support building your team. Contact Eleanor Carter.

Registering your details and uploading your CV can help us find you the right job faster!